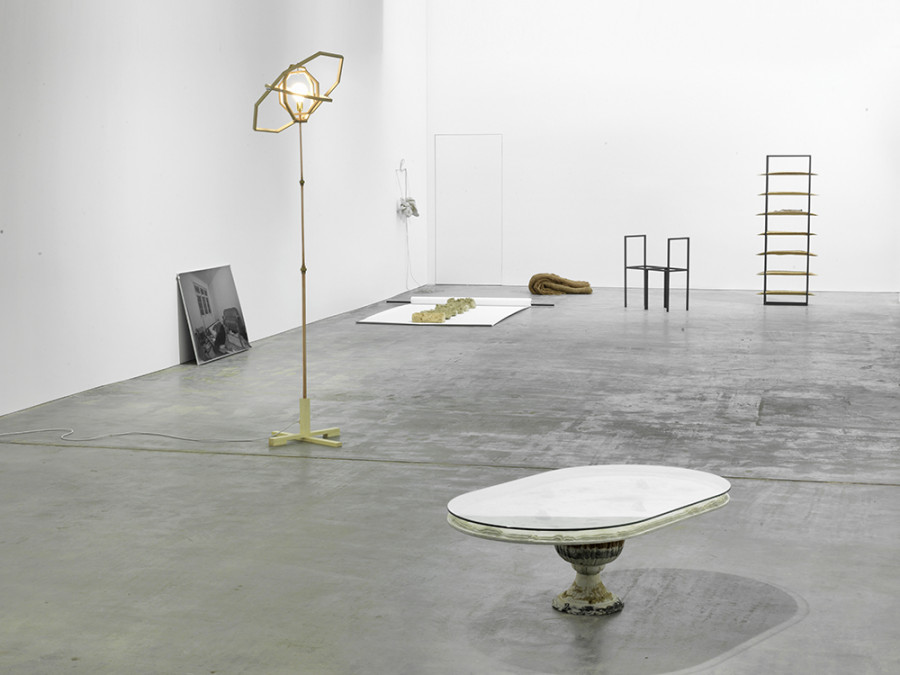 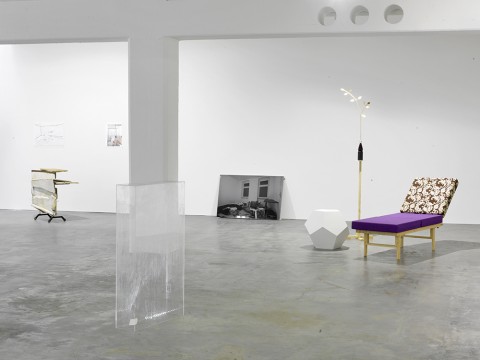 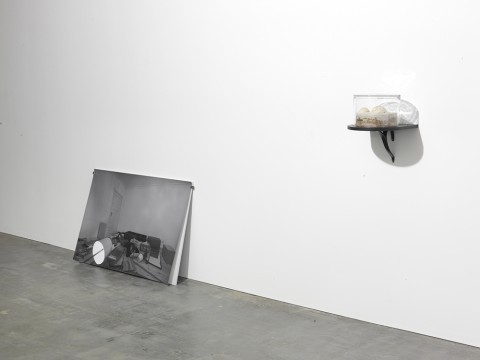 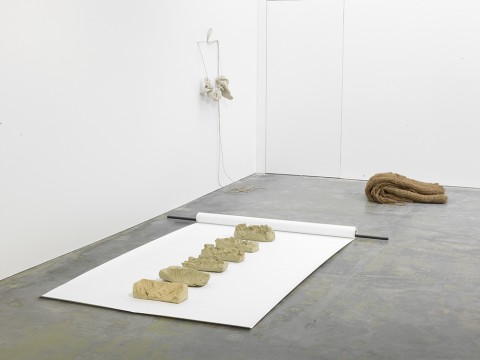 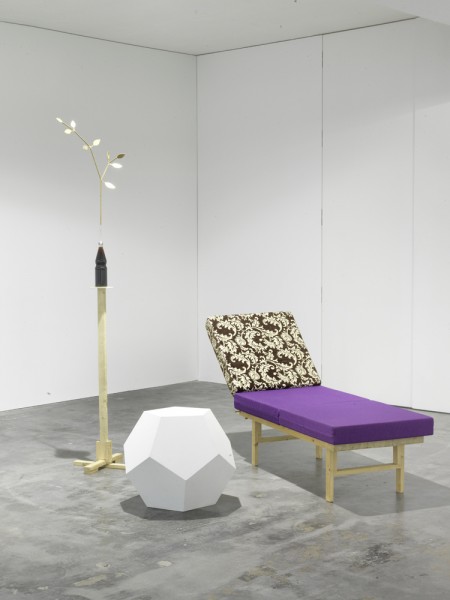 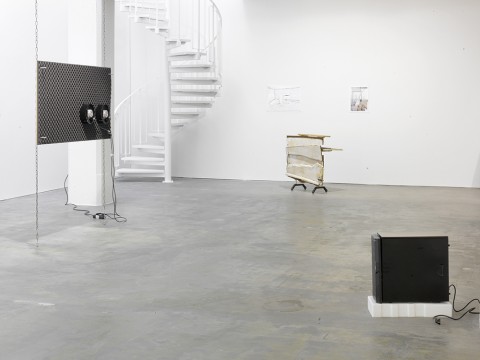 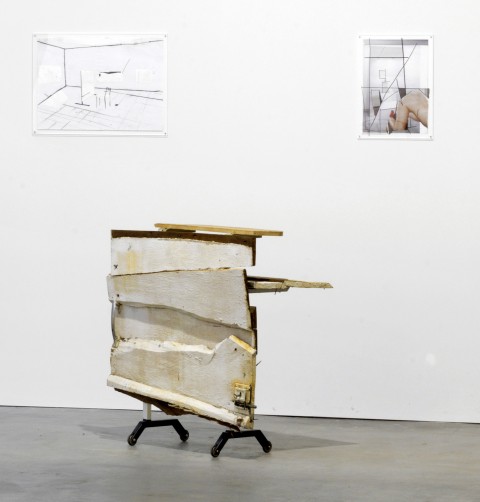 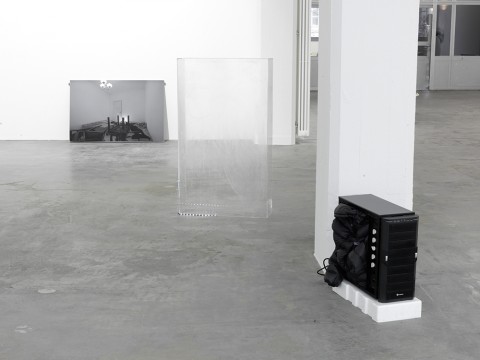 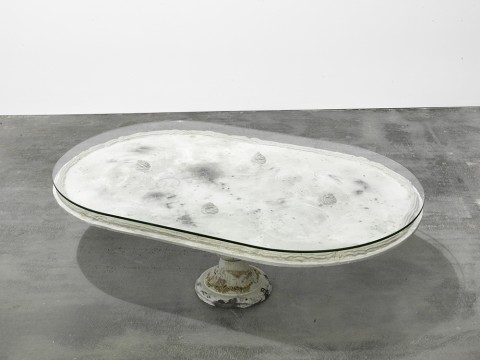 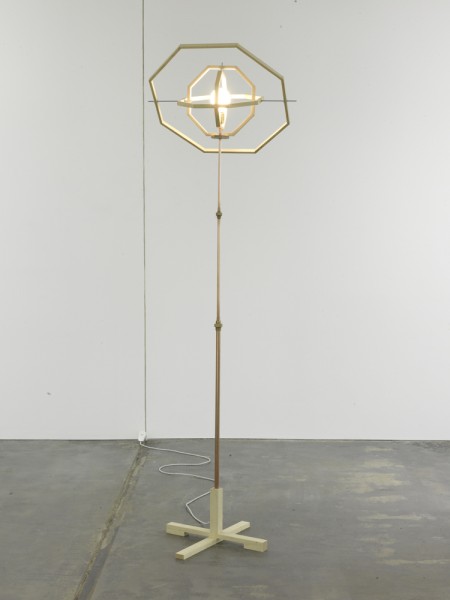 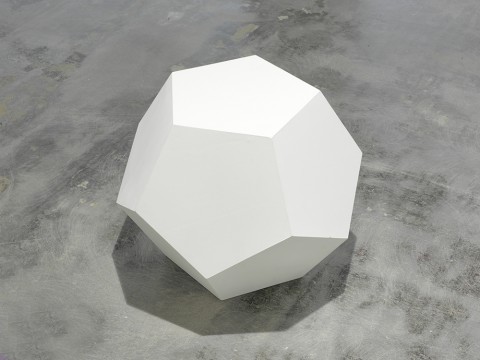 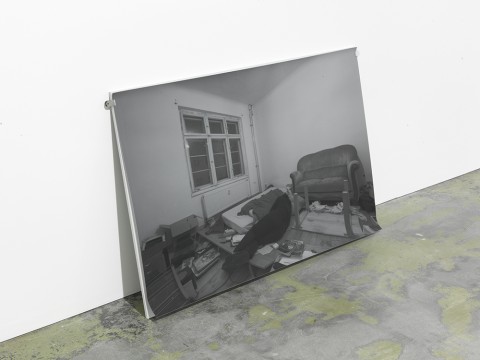 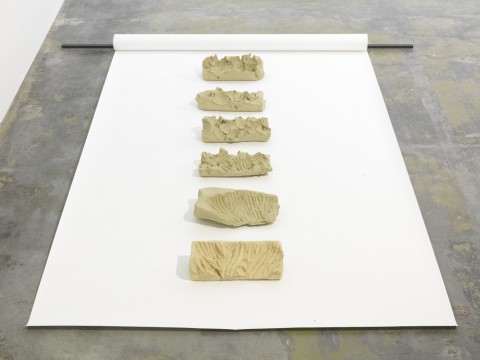 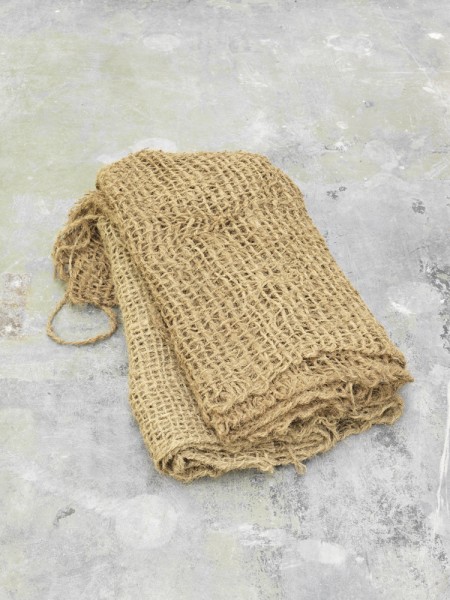 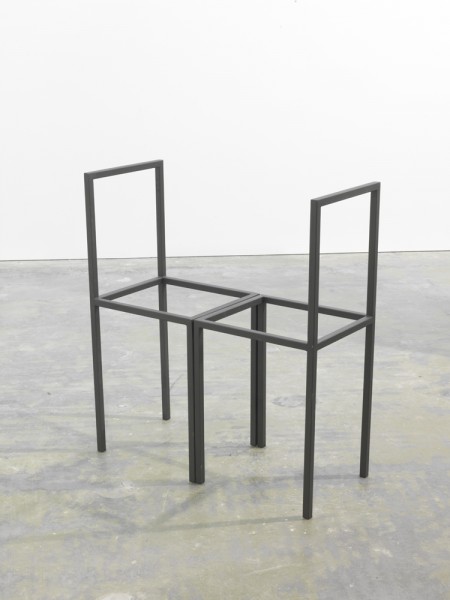 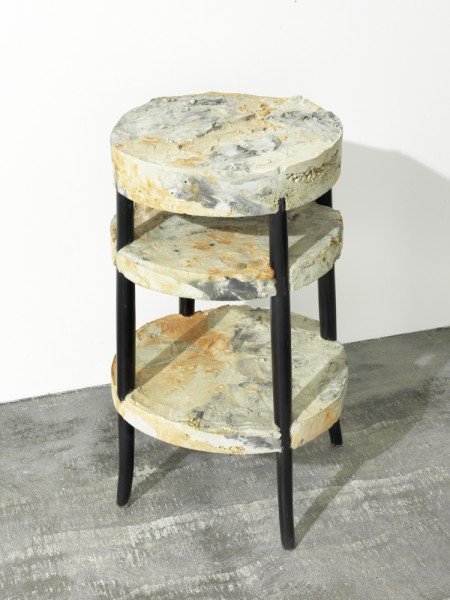 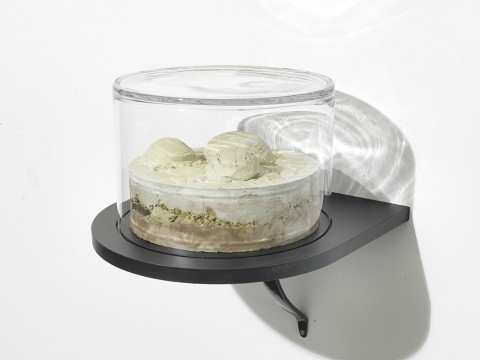 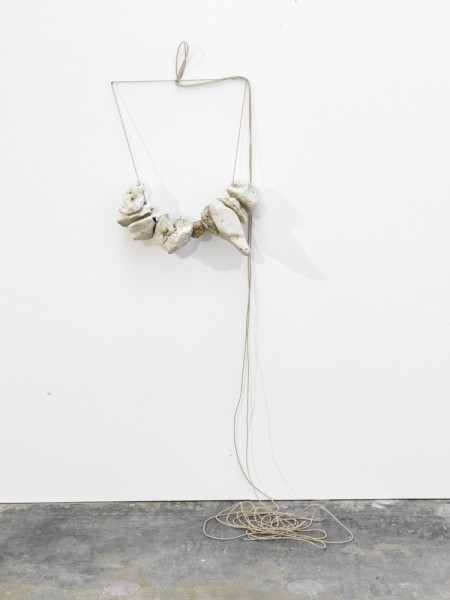 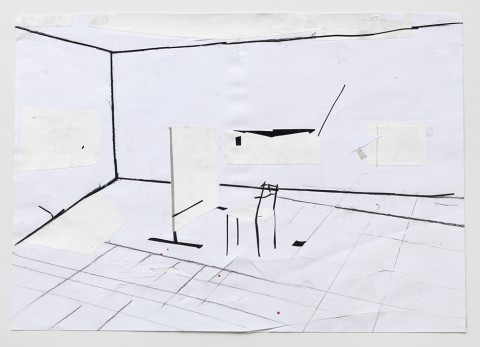 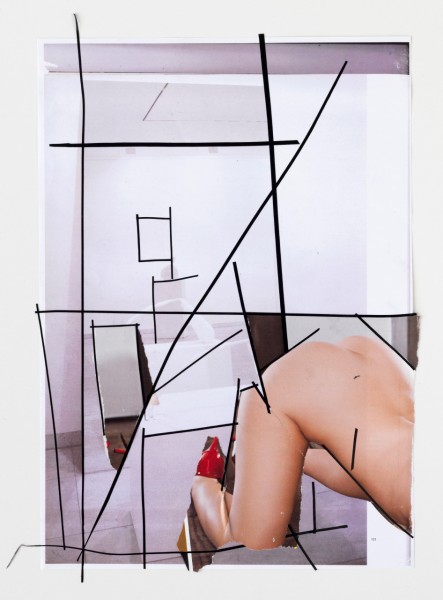 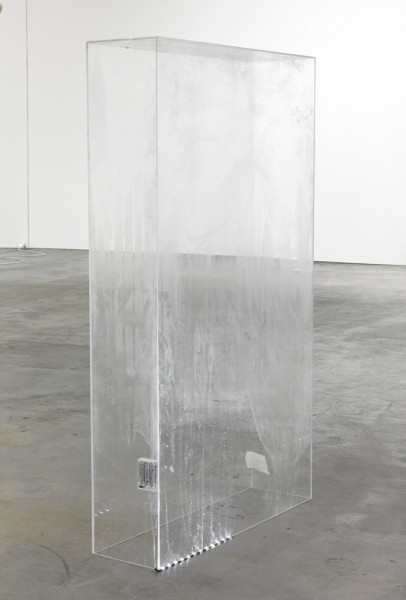 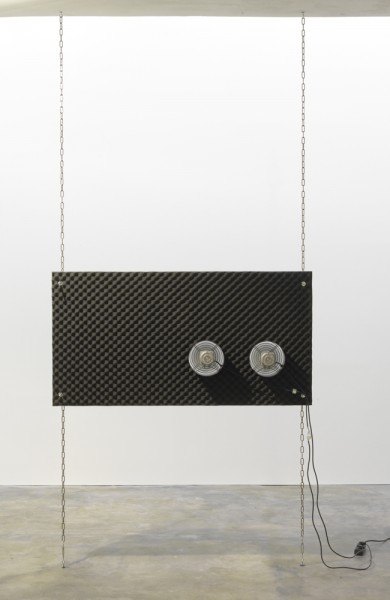 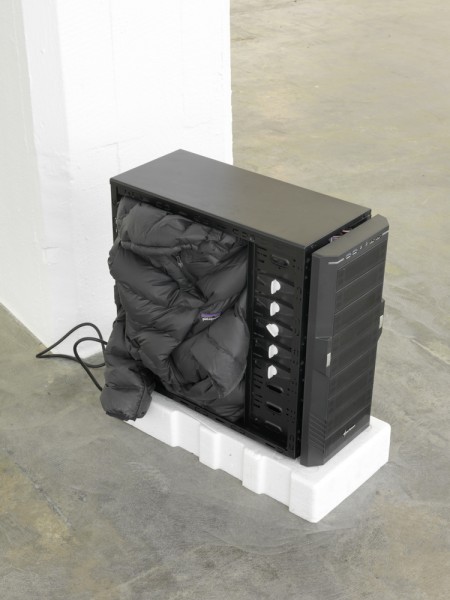 For all their heterogeneity, the artistic approaches of the works exhibited here have one thing in common: they all continue the avant-garde project of scrutinizing the relationship between art and life, each of them demonstrating an explicit connection to architecture or design. The objects and installations presented ignore the categories ‘useful’ and ‘beautiful’ and extend artistic practice to encompass the meanings that are inscribed into everyday things but generally remain hidden. In their diversity these works negotiate the relationship between the ego and the world, the internal and the external, material and spirit, thereby opening up new possibilities for the appropriation of reality.

The sculptures and installations by Berlin-based artist Björn Dahlem (b. 1974) give expression to things that take the human imagination to the limits of its capabilities. Playfully transposing complex phenomena from the natural and human sciences into contemporary sculpture, he neither resolves nor explains areas of uncertainty. His installation Mare Tranquilitatis (Tree) (2008) and the light sculpture Galaxie (2014) create atmospheres of contemplation; places for reflecting on the world and, above all, on the self.

The work of the Bratislav artist Petra Feriancová (b. 1977), who represented her country at last year’s Venice Biennale, is concerned with the conceptualisation, in various media, of her own emotional reactions to the moment of perception and remembrance, although her use of predominantly found materials also provides access to the personal moments of others. Feriancová starts with fragments of everyday objects and transforms them into bearers of meaning. In doing so she traces the connections and boundaries between her own and other people’s associations, which are inscribed into and shape the material.

In his films, drawings, collages and sculptures, Erik van Lieshout (b. 1968), who lives and works in Rotterdam, relates personal questions to social, political or cultural developments and ills. As with the collages on display here, Erik’s Desk was created in the process of making his film Janus (2012). This bureau-like piece consists of found objects from the streets of a derelict garden city just to the south Rotterdam, home to Erik van Lieshout’s atelier and formerly to the collector of curiosities posthumously portrayed in his film. The works exhibited are testament to an artistic practice that consistently thematises the conflict between societal expectations and the self-conception of the artist, between reality and art.

The drawings, installations and associated photographic documentation by Berlin-based Danish artist Lonny Fechner (b. 1974) tend to be concerned with the destabilisation of spatial situations. Her work frequently confounds the physical laws of matter. The photo series Liegende Interieurs (2013/14) lays standing objects low – personal domestic effects along with the resting bodies of their owners – creating a typical image of release with gravity at the forefront. Fechner’s interventions unsettle the habits of perception according to which reality is structured.

The preferred material of Berlin-based artist Philipp Modersohn (b. 1986) is concrete. Probably the most widely used building material in the world, this form of ‘artificial stone’ is here used to produce sculptures that draw on the imagery of domestically situated objects; hybrids of nature and civilization. With decorative elements in a kind of confectioner’s baroque, his table-like StracciatellaPlateau(2014) breaks with conventional expectations concerning the function of the material and effects an interaction between public and private, interior and exterior.

Yves Scherer (b. 1987), the London-based Swiss artist, deals with environments and objects of exchange and communication. From the perspective of the so-called post-internet generation, his sculptures, films and online projects – often arranged as installations – are concerned with the relationship between real and virtual everyday worlds, that is, with life and experience in the internet age and the effects this has on social reality. The plexiglass sculptures from the series Untitled (2013) stand as vehicles of social communication: interactive, useable objects – home devices – in physical space. They constitute an interface between the contemporary domestic environment and the virtual construction of the self.

In building a bridge between life and art, by ignoring or blurring the boundaries, the works by these artists facilitate a borderline dialogue that continues in social space. Taking up the referents and contents of objects either personal, social or political, they enrich the concept of the work of art with the sphere of the life-world, yet without abandoning its autonomy.