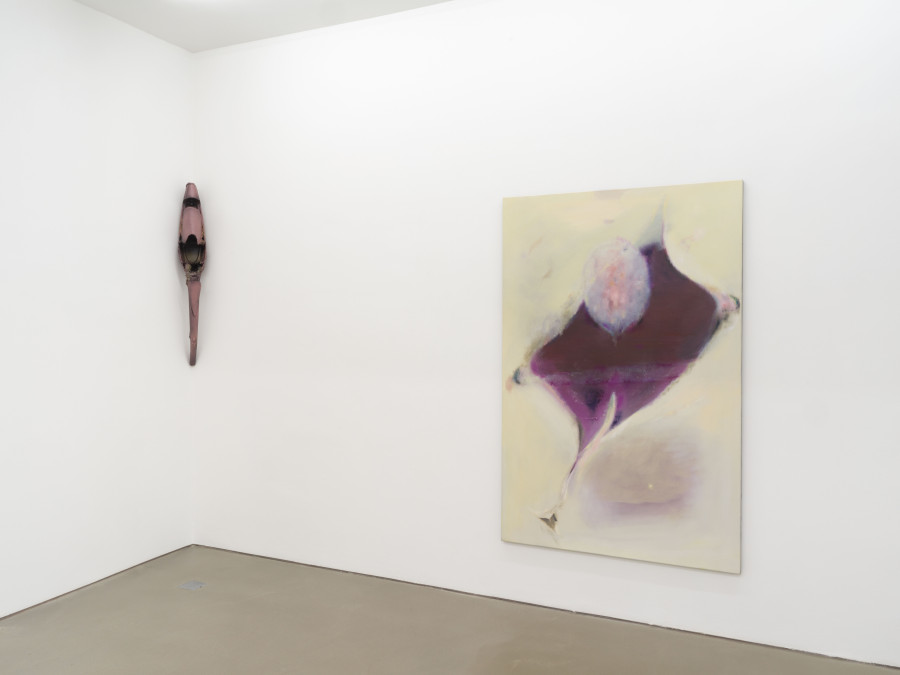 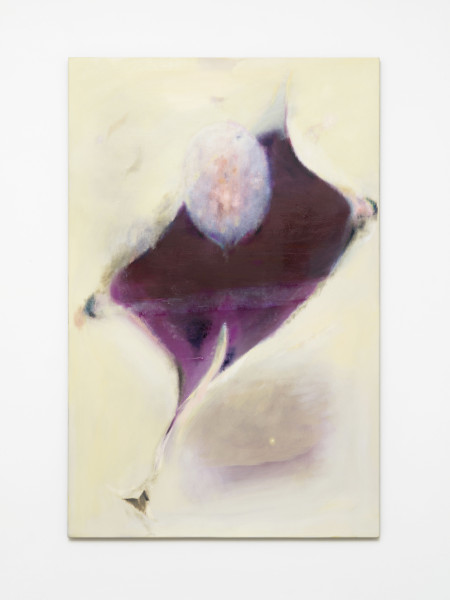 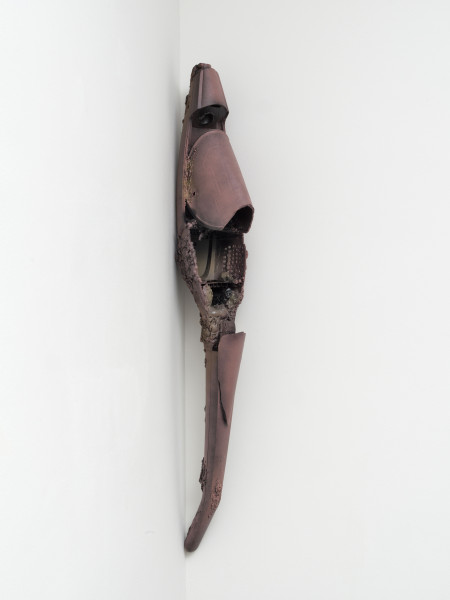 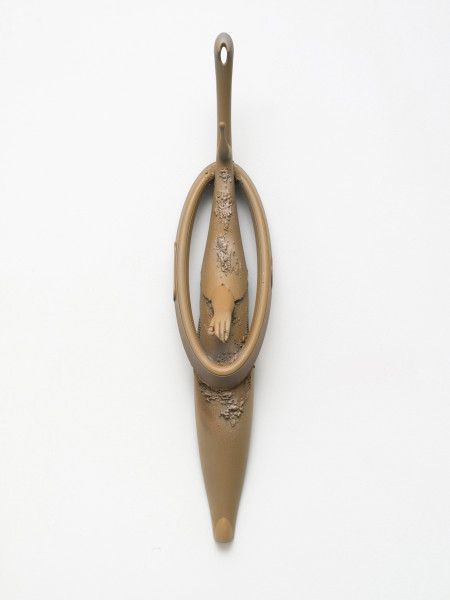 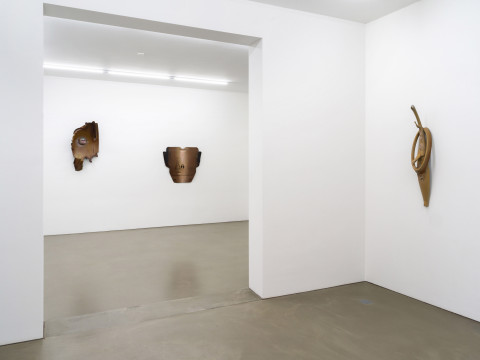 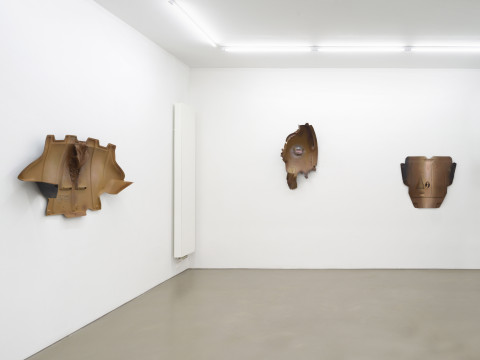 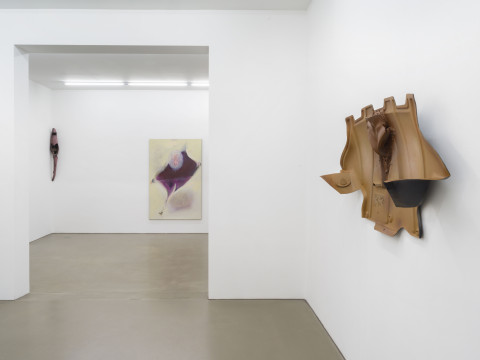 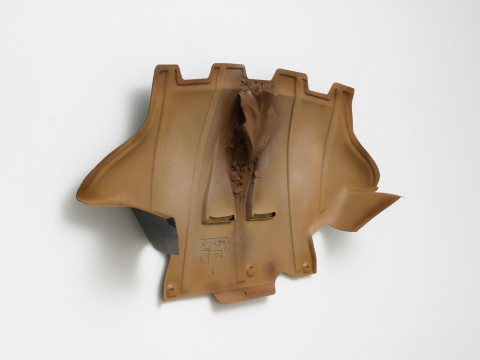 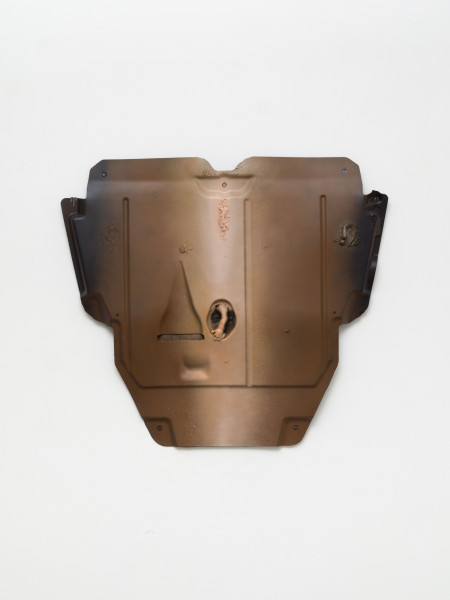 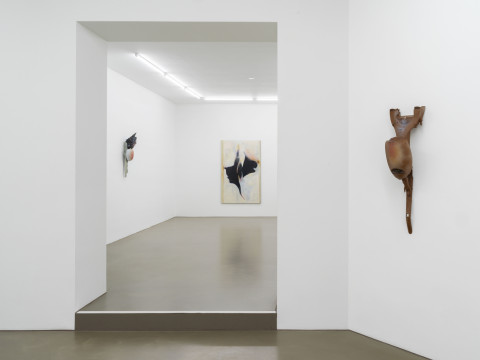 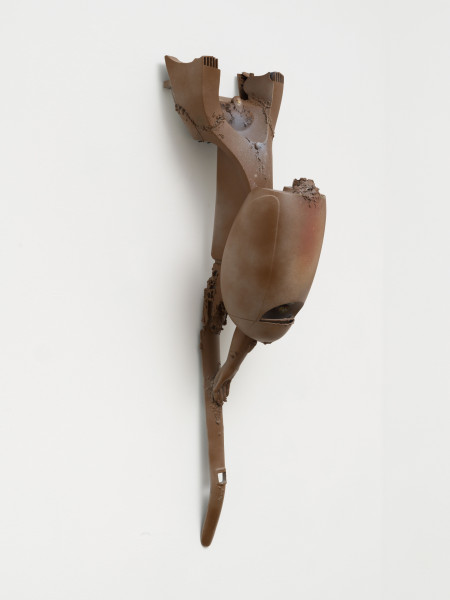 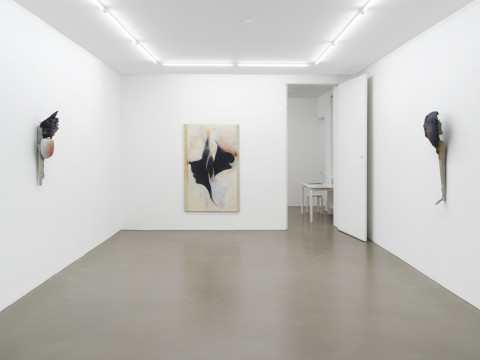 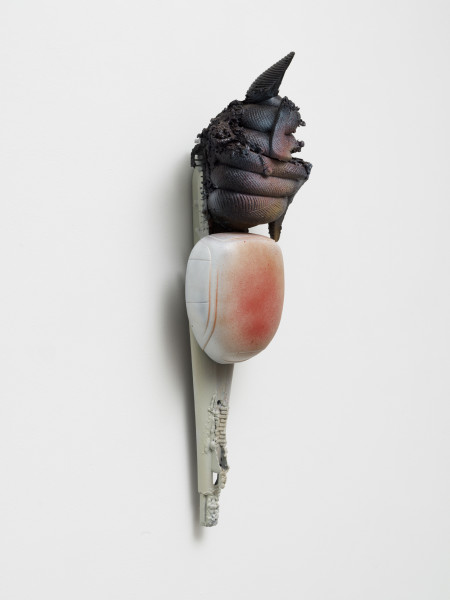 Trophy From Between Dimensions, 2022
Thomas Helbig 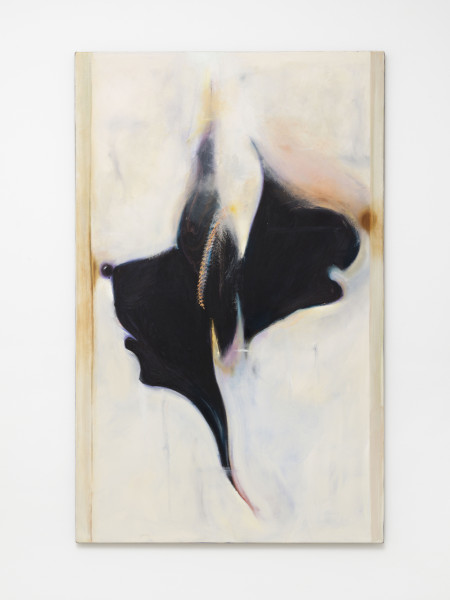 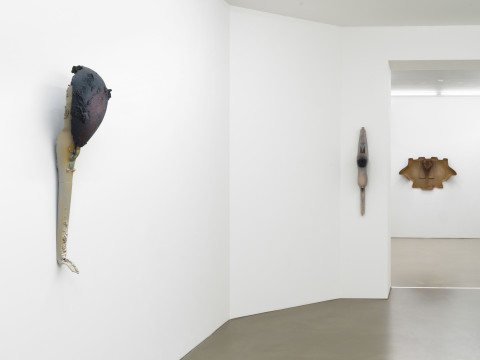 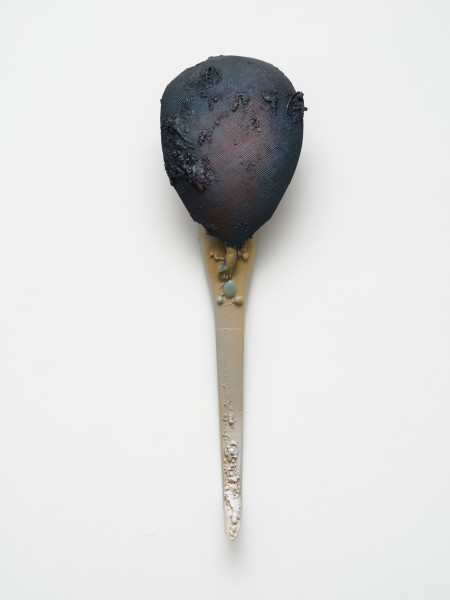 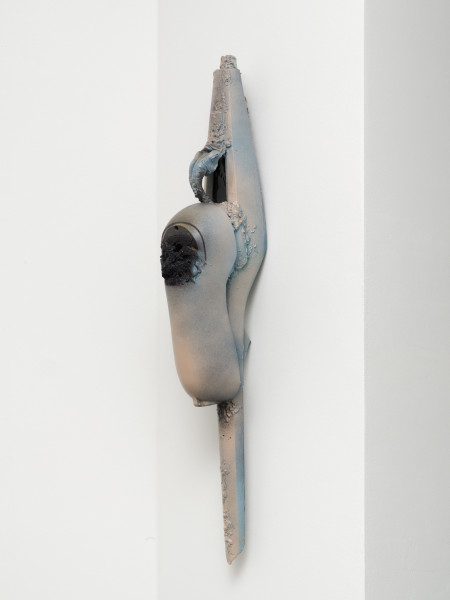 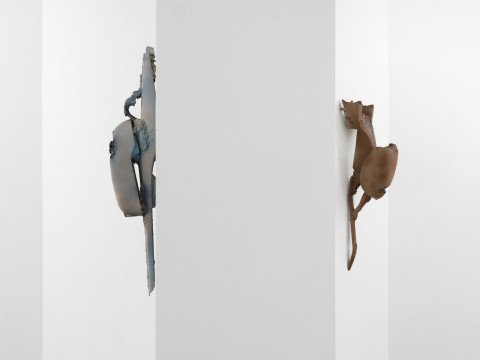 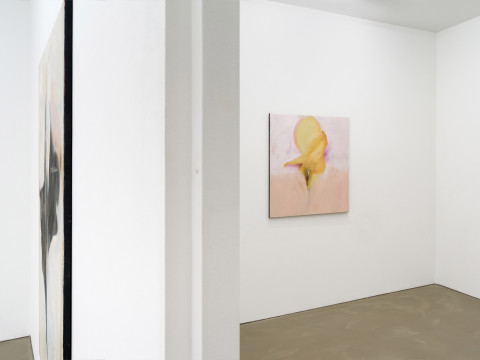 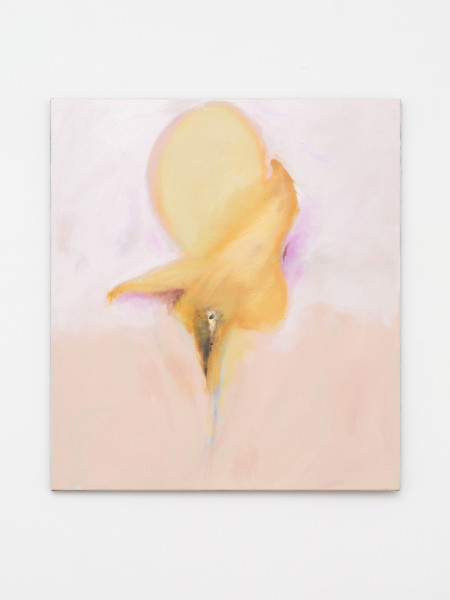 „Historians and sociologists inform us that the West’s mystical heritage (…) crashed on the scientific shores of the modern age. According to this vision technology has helped disenchant the world, forcing the ancestral symbolic networks of old to give way to the crisp, secular game plans of economic development, skeptical inquiry, and material progress. But the old phantasms and metaphysical longings did not exactly disappear. In many cases they disguised themselves and went underground, worming their way into the cultural, psychological, and mythical motivations that form the foundations of the modern world.“   Eric Davis, Techgnosis

Galerie Guido W. Baudach is delighted to present Thomas Helbig's ninth solo exhibition with the gallery at the beginning of 2023. Under the title Machines' Trophies, the Berlin-based artist is showing new paintings and wall objects. The exhibition reveals what a remarkable development Helbig's multidisciplinary practice has once again taken in recent times.

His sculptural work, for example, is still characterized by a highly distinctive formal language and continues to be based on assemblages of deliberately produced fragments of selected found objects, which only acquire their uniform appearance through the extensive overpainting. But while so far it was mostly cheap decorative kitsch figures that Helbig deconstructed into fragments in order to create completely different appearances from them with the help of foam glue and spray paint, he now increasingly uses components from mechanical and technical equipment. The new materiality lends the works a decidedly technological dimension and thus simultaneously expands their context. If the sculptures previously often seemed like fossilized metamorphoses of strange-grotesque entities, craggy hybrids between human and animal, they now appear as animistic transformations of modern industrial design or, as it were, as totems for AIs. Criticism of technology and consumerism are not negotiated here. Rather, in Helbig's wall objects, the promises of the fetish of progress inherent in the futuristic design of the machine parts processed in them merge with the aura of quasi-religious transcendence, which is fed by their similarity to ritual artefacts of the most diverse origins; An amalgam effect that functions not least by activating the viewer's cultural image memory, and which is intensified by the pointed incorporation of certain elements from Helbig's rich fund of set pieces of cheap deco kitsch, such as the baroque-looking little hand of a putto figure. The sculptures oscillate constantly between figuration and abstraction.

The same applies to Helbig's new paintings, in which individual representational pictorial elements also appear without these concrete details having a significant impact on the indeterminacy of the whole. There is something mysterious about these paintings. Very soft, almost buttery, rich in contrast and full of the finest nuances, they are painted in oil on canvas. Dark, amorphous bodies in the centre, appearing like holes in a light cloudy sky, dominate the scenery. Their hovering evokes a strangely frozen dynamic, a comatose standstill of the moment, which, however, seems to be able to suddenly start moving again at any time. One is reminded of certain tendencies of Abstract Expressionism, but also of Rococo painting. At the same time, these paintings, just like Helbig's sculptures, are surrounded by a playful distance to their manifold references and their promises. Behind this stands an artistic attitude that is familiar not least from some of the positions of surrealism.

In this respect, the paintings and wall objects on display also have something of a backdrop. As if they had been taken from the set of a fantasy film, a vision of the future that bears traits of bygone eras. There they could be part of the furnishings of a temple dedicated to a cult that humans, replicants or even other intelligent life forms possibly even cultivate together. In any case, the works have a sacred, magical-energetic feel. And no matter how serious they ultimately are about it: In their transformative presence, the new sculptures and paintings by Thomas Helbig seem literally enchanting.

Thomas Helbig was born in Rosenheim in 1967. He studied at the Munich Art Academy and at Goldsmith College in London. Helbig has lived in Berlin since the late 1990s. His work has been shown in numerous seminal exhibitions at home and abroad. He is represented internationally in various important private and institutional collections. Currently, his sculpture Machine, created in 2004, is on display in the course of a new presentation of the Modern Art Collection of the Bavarian State Collections under the title Mix&Match at the Pinakothek der Moderne in Munich.